Last week was terribly busy, but I managed to take the dogs to the local historical farm-park.  We had such cool days, and I wanted to take advantage of them before the temperature shoots back up into the stratosphere.

We walked a small trail, then stopped under a large tree for a breather and a drink.  The stone wall behind the pups is actually the slave graveyard – the park used to be a working farm in the 17 and 1800s.  I’ve never run into a slave cemetery before, probably because I’m from the north and we didn’t pull as much of that slavery crap.  The cemetery is inside those four stone walls, and is terribly overgrown.  It is considered abandoned, and no one is sure who is even buried in there.  I think that’s terrible.

I just finished a book called The Restorer and it’s about a woman who restores abandoned grave sites.  It’s fiction, but people like that do exist.  I wish someone would come here to document who is buried, install markers, and clean up the site.

The dogs had a great time, and I really needed a break.  At one point I simply tied their leashes together and let them walk each other.  Hey, they’re both old and neither one of them are going anywhere.  This was our second trip to the park: the first experience was marred by one of Laceigh’s nosebleeds.  Thankfully, we were spared that on our walk.

Don’t they look happy?  I can’t wait to go back. 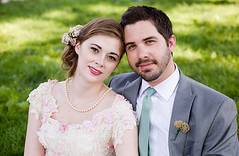 The Hobbit or There and Back Again
by J.R.R. Tolkien